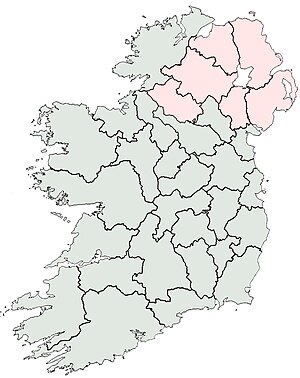 Ok, Granted, reading this title may seem some kind of a contradiction in terminus, as Ireland is known for many things like Guiness and U2, but camping/caravaning probably isn’t one of them, due to it getting its fair share of rain, but once you can get your head around the fact that there are plenty of rain less moments, there are great places to go camping and explore the region.
There is a little book I picked up ( cost is 5 Euros), which is issued by http://www.campingireland.ie/ and it has comprehensive listings of campsites around Ireland and Northern Ireland.
As Ireland is an Island, we are surrounded by water, which also means beaches – and I must admit, even after all these years, I am still discovering places I never knew existed.. Breathtaking horizons, beautiful landscapes, the list goes on. Kerry is probably best known for its beautiful nature/ beaches, but there are beaches everywhere along the coast, such as Waterford, Wexford, Cork, Antrim(Northern Ireland), to name just a few. If beaches isn’t your thing, there are also plenty of Mountains to climb 
I love the beach at Louisburg(Co. Mayo) http://www.mayo-ireland.ie/Mayo/Towns/LouisB/LouisB.htm, Inch Beach ( Co. Kerry) and of course Dog Beach in Galway. This website has a good collection of beaches in Ireland.
We recently visited Northern Ireland, and came across the white sandy beaches in Portrush and Benone on the East Antrim Coast.

Image via Wikipedia
To find out about campsites in Northern Ireland, this website might be of help : http://www.caravansitefinder.co.uk/parks/find/location/448-northern-ireland
One of my most favourite campsites called http://www.wavecrestcamping.com/ in Co. Kerry.
It’s clean, tidy, has hot showers, well organized, and has a well stocked shop for provisions and is in walkable distance from a small white sandy beach, and as it’s overlooking the Ocean there, my husband gets to go fishing ( and I get to relax at the beach, whilst the kids build sandcastles) They also organize boat trips  in and around Derrynane :Derrynane Bay and the larger Kenmare Bay are within a Special Area of Conservation. Most notably Derrynane contains islands and marine habitats that are part of Natural Heritage Areas and are further divided into habitat specific zones. Each zone has within, species that are listed on Annex 1 of the E.U. habitats directive and are protected. Derrynane Bay Rib Trips brings to you this amazing part of South West Ireland. Step aboard, relax and explore the Derrynane marine habitat. In summer you will see Atlantic Gannets, Razorbills, Puffins and may encounter Bottlenose, Common Dolphins and whales including Minke and Fin. http://www.ribtrips.ie/
We went camping there about 7 years ago, before our kids were born. We decided that it was time to introduce our kids to the idea of camping( they are 4 and 6 now) and spend a beautiful Bank Holiday WE there and it was a success!
One word of advice… Bank Holidays are THE BUSIEST times on Irish campsites, and most campsites will not allow you to prebook, so to avoid disappointment, make sure you turn up early, or ring the campsite ahead if there is much point to start a possibly long journey.
Here is a picture of the view we had from our tent at wavecrest in Co. Kerry. 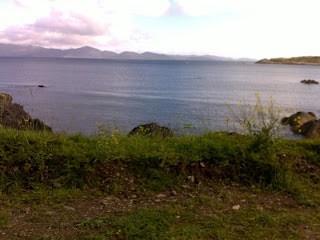 As I mentioned earlier, my husband did a bit of fishing, and succeeded in catching a few Pollock, which meant we had Fish for dinner, served with yummie Caherdaniel spuds( Potatoes) – I find food always tastes much better in the open air!
If the idea of a tent is not quite your cup of tea, you can also rent a caravan or rent a campervan.
A couple I have come across : http://www.vanderlust.com/ and http://www.iwmotorhomes.ie/
As we are fast approaching the end of our summer, its THE moment to buy yourself a tent/camping equipment, as many of the shops are selling of their tents and camping gear.
Check out http://www.millets.co.uk/home.html, www.greatoutdoors.ie www.argos.ie http://www.omearacamping.com/index.htm ( in no particular order)

I am already debating where we can go camping next!