First of all, welcome to my blog!!

I am delighted you have found my blog, and that you are taking your time to read some of my blog posts here. So what about me?
My name is Katleen, and I am based in South Galway, in the parish of Peterswell, in the townland of Skehanagh in a region in
the west of Ireland called the Burren Lowlands. I moved to Dublin in 1993 from Belgium for love and adventure and found both:) 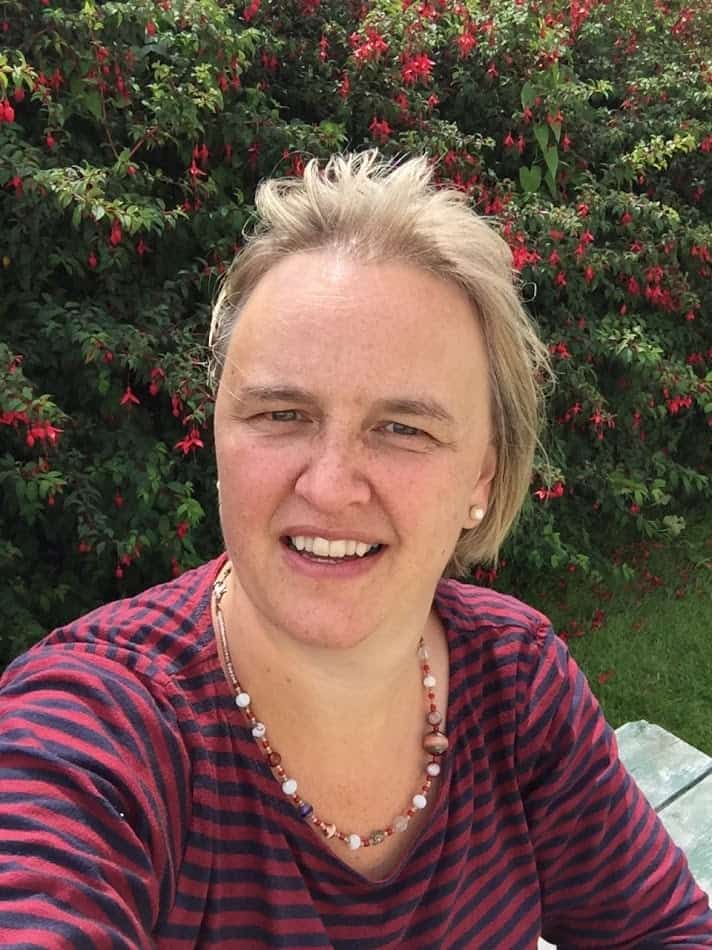 Picture of myself, taken on InishBofin, Co. Galway

I met my husband the year after I moved to Dublin, we lived in Dublin for a while and then ended up in Galway really by accident! I had applied for many jobs, had lost track of what jobs I had applied for. It was only when I asked what job it was exactly I applied for, it turned out the job was in Galway.. Oh yes.. that place where it always rains.....
We moved from City Centre Dublin to the "country" in Oughterard(also referred to as the Gateway to Connemara), then moved to Clarinbridge, and now Peterswell is our home.  One of the reasons we choose Peterswell was because it's located halfway between Ennis and Galway. At the time I was working in Galway and David was teaching in Ennis Co. Clare, so it was a good choice. Fast forward and 2 children later, I have had many jobs, mostly in software companies.
I started this blog in 2009 ( actually I had another HTML blog that I created in 1998 but that got hacked!) to provide resources for people that wish to move to Ireland. When I moved to Ireland it was very difficult to find a job, and I hope to give you some links to various websites, recruitment agencies, and governmental agencies that may be helpful in your job search and some insights I have acquired over the years. Update 2021 - For the last 2 years, I have been writing a monthly newsletter called Galway Job Connector  - sign up is here or follow on Facebook and Twitter. Haven't updated in a while, it was partially an experiment to see if I could consistently write a newsletter - guess what , I can :). I recently started a new newsletter for my new website www.gortcycletrails.com -- sign up is here!

I have worked in a variety of companies, some of them start-ups, others, long-established companies, all very much to do with American companies setting up their Pan-European base in Ireland. There was a time that I wanted to explore the options to be self-employed. Both my parents were self-employed at some point, so I guess that's where I got my entrepreneurial spirit. I took the opportunity to avail of voluntary redundancy after the birth of our second son Alex in 2006 and furiously started to think what I could do, being self-employed.  An online shop was something that I had in mind. Around that time David suffered terrible back trouble and one way of easing that pain was by applying a heated cherry stone pillow. I hadn't really seen these pillows here before, so I did some research and found out that the pillow we had was actually made by a company in ....Belgium.I contacted the manufacturer, as I thought it would be a good product to sell on-line. He was very happy to supply the pillows at trade prices, however, once I did some calculations, the shipping charges would be so high, I really wouldn't make a profit. As the supplier did not have a distributor in Ireland, I said that I wouldn't mind trying it, so I ordered a pallet of Cherry Stone Pillows. I started selling them to local shops, chemists, nursery shops, and also gift shops. I then got introduced to another Belgian company that sold a children's range designed by a school teacher, and soon I was carrying a number of ranges. I named the company Belgian Treasures. Every time I mentioned the name, people thought I was selling chocolates or beer. It did make me realize that choosing a company name is quite important, as people have their own associations with a name. When Alex when was 6  months old, a friend of mine in Belgium gifted him a pair of leather baby shoes, that turned out to come from New Zealand. I got in contact with a company in New Zealand. The shoes became my best selling product, and gave me the opportunity to take part in trade shows in Dublin and Manchester, meet other entrepreneurs in Europe that were selling the shoes too, and towards the end of my business, I appeared on Ireland AM.
Yes, I am proud I did that! I changed the company name to Ecotreasures, as it reflected the products I was carrying better. It (unfortunately) did not make a difference. I tried to keep the business afloat, but the recession had hit hard ( I was supplying 35 shops - only 10 are still open now) and by 2010, I had to make the hard choice to pull the plug and find a job.

The job situation had changed significantly. During the Celtic Tiger, it was relatively easy to find a job as a multi-lingual, and I would often do an interview, and by the time I walked out, I was offered the job. In 2010 it didn't seem to matter how many languages you spoke, how much experience you had ( or not), getting a job was a struggle, and it was a game of survival of the fittest. Around that time there was a huge wave of people immigrating due to a lack of opportunities. I did several interviews, and it was around that time I really thought of moving back to Belgium as I really wanted to work! I eventually did get a job in a call center in Shannon where I earned the minimum wage. The kids were 4 and 6 at the time, and between the travel expense and child care costs, I had nothing left to "spend", but looking back it was the best thing I ever could have done. It eased me back in the workforce, got up to speed on technology again, and worked with great colleagues, which was probably the most important aspect, a bit of social interaction.

After about a year,  an Ex-Manager from my Celtic Tiger Years contacted me via Linkedin. He was US based, and he wanted to find out if I knew someone who could provide technical support in Ireland. The role would be home-based. It sounded like a plan, and I happily worked 5 years from home - the kids were still very young which meant I could drop them off at school and pick them up in the evening. I am so glad I had that time with them!

It was a big decision to give up the home-based role, as it was a great job, great benefits, but I felt I was missing out on social contact. So I made the jump to accept a job in Galway City .. knowing I would be stuck in traffic... I discovered there was a rail connection from Oranmore, so I travelled by rail. It was the best 10 minutes in my day, skipping all inbound traffic into Galway and be in Galway City Centre in no time from Oranmore.. More changes brought me to Parkmore, another location with my opportunities if you can cope with the traffic jams.. To beat the congested traffic into Parkmore I cycled the last 5 km - I joined the BikeToWork Scheme and bought myself a new bike for Christmas 2018, probably the best present I have given myself in a while!

Covid-19 also took its toll on my job, and after extensive job hunting, I started a new job in September! No more commuting into Galway:) Instead I work from home a few days and a few days at the newly opened co-working space in Gort called www.forgeworks.ie

I am still fascinated by business, and although I am no longer "in" business, there are many things I have learned! In 2020 I  completed a diploma course in Digital Marketing and I hope I can help some businesses by showing them channels they can use to promote their business.
I live in a beautiful area, and love going on trips, so those are also covered on the blog.  If 2020 did anything, it forced me to really explore locally! Turns out there is a lot I didn't know about, right at my doorstep! I mapped a number of #SafeCycleTrails and set up a group on Facebook called Gort Cycle Trails.
Once we are out of Covid Hell, I am hoping to set up monthly Cycle/Walking Meet-Ups to Explore the Burren Lowlands. Check out the trails I have mapped out so far here!
I featured some local businesses on the blog back in 2015, if there is a business out there that would like to be featured , contact me here.
Find the Facebook page for this blog here: workinglivingtravellinginireland( come and say hello).
I am also one of the admins at a large group of Belgians abroad, called Belgen in het Buitenland.
I am a big supporter of Bumbleance, and grew 240 hyacinths to raise much-needed funds a few years ago.
From 2019-2021  I was part of a community group called the http://www.burrenlowlands.org , initially as secretary, when an Enterprise Business Manager was pointed. I was volunteer Social Media Manager & Secretary, wrote Press Releases when needed and managed the Social media for #RedRoute5.
In November I joined the Cyclist.ie Executive team as a volunteer, representing rural cyclists in South Galway!
You can find me on Linkedin too!
Thanks for your visit!
Katleen