I dropped off the kids at their last day of Gymnastics summer camp in Kinvara, organized by Burren Gymnastics, and as I had a few hours to spare, I had a walk around Kinvara. 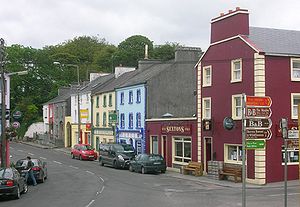 We live quite near Kinvara, and had heard about the market there, but never actually ventured into it,so as I was there , I thought I’d pop in and see it for myself.
To check out the pictures I took, follow this link:

The market is held on a Friday, from 10 AM till 2 PM and is situated in the middle of Kinvara beside Johnston’s Youth Hostel.. I had seen some posts on their facebook page about the music that is played during the market, so I was a little curious to see it all happen in reality.
I took a little video of the musicians whilst they were playing some Irish music.

It was a really sunny day, and there were plenty of stand holders and plenty of atmosphere.
On my entry I was met by the Doolin Farm Direct , who rears and sells meat from his farm in .
They also do a box scheme.

There were gorgeous bagels made by a local company called The Galway Bakery.…. The odd time I would go to the Galway market at St-Nicholas, and then I always make a point to get a good supply of them, as we all love them! Unfortunately I forgot  my purse, which meant I took more pictures and chatted to people rather than purchase many of the gooddies..

Another standholder that caught my eyes was.Antoinette from Wilde and Wooley with lovely knitted sweaters , gloves , scarves and much more.  I particulary loved the gloves!
Antoinette also maintains the facebook page of the Kinvara Market, so why not join their facebook page.
Turns out there is an arts and craft trail in Clare, which brings you to the various crafters and artisits in the region. Another trip for another time..

Dirk Flakes organic produce are well known in the area, and the stall was busy with customers buying organic produce and other delicatesses.
Chris Murray, a local artist, had an impressive range of painted landscapes and little necklaces with gems.

Peter Goosens from Peregringo Co.Clare  in Fanore has a range of Celtic boxes, lithographic prints and cottage produce. I once tasted his dandelion syrup and thought it was gorgeous on brown bread.

I had heard about the Friendly farmer, and was delighted to meet Ronan. I follow his blog
There were lovely strawberries from Rose Cottage from Laois , pickledgherkins, and I took a real liking to the brainfood by Julie Murphy from http://www.thebraingrainbar.com/, I had a little taste of the energy bars, and thought they were yummie and love the nutty aftertaste..

I did buy some eggs from Frank Cummins, who operates in Clarinbridge. If you live around the Clarinbridge area he has an honesty box at the front of his property.

I was really getting quite hungry, and would have loved a German Bratwurst , but helas, as I had forgotten my purse, I picked up the kids, went to beach just outside of Kinvara and then drove home, happy I had taken the day off!