We visited the Galway Science and Engineering  Science & Technology Festival Exhibition
It was very well organized and a lot more manageable than two years,when it was nearly impossibly to navigate the main hall, due to crowds!
There was a great mix of stands, university departments showing off their departments with scientific experiments, all the main Galway multinationals ( Cisco, Avaya, SAP, Medtronic, Boston Scientific) and
a variety of schools , displaying their scientific experiments.
Aside from the stands, there were a variety of free activities you could partake in, however those required prebooking via Eventbrite ( they also have a handy app for your phone) and unless you booked the events ahead, there were long queues, and you were unlikely to get in , unless you had a ticket:)
The kids loved it, particularly the stand of the engineering stand , where they could play with …. Lego!
Below you see a picture of the boys and another boy at the Engineering stand. 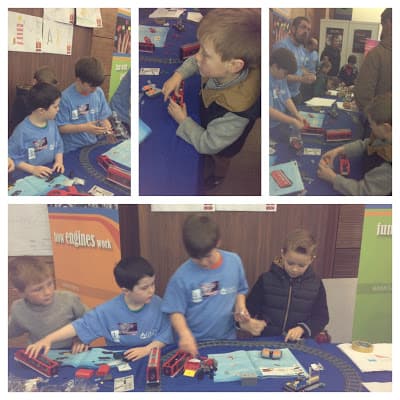 Alex, Two other boys, and Rueben
Having walked around the various stands of university departments, multinationals and local schools, I came to realize that there are a number of projects between a few of the multinationals and the local primary/secondary schools, but those projects are very much concentrated to  schools where parents that work in the multinationals are working, so the further away the schools are from the city, the more likely the school would not be aware of the opportunities to expose primary school children to the world of science and engineering. ( I am a bit biased as my kids are in primary)

Below are just a few of the projects I observed:

I had never really heard about this , but I think it’s a great initiative and if your kids/schools are interested in taking part in this challenge, you can contact them via this email  Once an adult or teacher  can get 6-12 interested children together, a team can be made.They  are no longer taking applications for 2012, but maybe it’s something you can get involved with in 2013. As someone said to me yesterday if your child at a young age likes playing with Lego, fast forward 20 years, they might become an engineer.
I am enclosing a small clip of a moving robot/spacerobot that the pupils programmed to make those moves.
Another really exciting initiative is Scratch, which was showcased by Avaya.
It’s an interactive software programme aimed at primary and post primary pupils which will allow students to create interactive stories, animations,games, music and art and share their creations on the web.
It’s not restricted to schools, as the software can be downloaded free of charge here and the following link contains Scratch resources/lessonplans
The inititiave is very closely linked to Coderdojo, which I covered in another blogpost a while ago.
The Steps website offers free visits of an engineer to primary and post primary schools and more info how schools can get involved in engineering, during Engineering week next year (25th of February till 3rd of March) for Schools to get involved in Engineering week 2013
Rueben was quite intrigued by putting a stent into a display of a heart at the Boston Scientific stand, loved watching through a miscroscope at the content of a  teabag( I can see rocks he said) and controlling a submerged robot  at the Marine research stand, was the icing on the cake!
We managed to get into the Blackrock Castle Observatory’s StarDome activity, which was a dome which looked a bit like a bouncy castle, as it was walls were filled with air, with a very narrow entrance, and required a swimming motion to open the doors then step into the middle and another swimming motion to get in the dome(hence the title of this blog article). Once we sat down on the floor, a very interesting display of the various star formations at night was shown, planets and their history, and a futuristic glimpse into 2075, where a grandad ( who origanlly came from earth) lives with his grandchildren on the moon.
Anything is possible:) who knows!

A thoroughly enjoyable day was had by all, and we are already looking forward to next years Galway Science & Technology Festival Exhibition! And hey, I even caught a fish!