If you haven’t been to Belfast in a while, I would recommend you take a trip!
It all starts off as you drive into Belfast, where you can see a huge sculpture called the Rise.

Rise is a 38m high new spherical sculpture designed by Nottingham-based artist Wolfgang Buttress, currently being installed at the end of Belfast’s M1 motorway, above the city’s gateway Broadway roundabout where it hits the Falls Road. The £500,000 duplex galvanised steel commission, consisting of one sphere set inside another, was won in a competition in 2008 and symbolises, according to the artist, “a new chapter in the history of Belfast”. ( It’s already been affectionately renamed “The Balls on the Falls”.)
We decided to visit whowhatwherewhyhwen museum I would highly recommend it!
Here are the instructions on how to get there .
It’s a huge museum over several floors, dedicated to technology and science. Just about every  topic is covered, and is a great place for kids to try things like flying an airplane, steering a (motor)boat, build an engine, understand gravity, make a film, learn about inventors, the list is endless. (Just one thing, if you are from Southern Ireland, they don’t accept Laser card, so it’s cash or Visa Card).
There is a Costa Coffee bar, but you can also bring your own lunch, which I thought was a great idea. (Saying that the children’s menu Chicken Nuggets and a drink for £1.99 really was a good deal)
It got pretty busy, so I would advise to go early!
Here is a link to the opening hours and admission charges.
If we were living a little closer, I’d consider holding a birthday party there for the boys!
There is also floor dedicated to the building of Titantic, as it was built in Belfast.
It will be 100 years next year ( 2012) that Titanic sank and lot’s of preparations are on the way to commemorate the event.
This is the way the building will look when finished.

A new building is currently pushing its way towards the sky in Belfast’s Titanic Quarter. Drive over the Lagan Bridge or along the historic Queen’s Road in the heart of the former shipyard and you will see a stunning piece of architecture coming to life.
The building is clad in metal shards and when the light plays on them it looks like the movement of water. From above, the building resembles a white star, the symbol of Titanic’s operators. When finished, the visitor attraction will be surrounded by public realm, including reflecting pools and a trail which will take the visitor on a journey through Belfast’s industrial past.
After all that, it was time for a bit of retail therapy! There is a new shopping centre in Belfast called Victoria Square Shopping Centre ( I suppose it’s a bit like the Dundrum Shopping Centre of Northern Ireland) 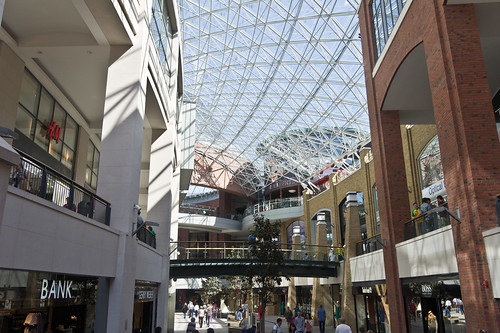 As we walked over a Pedestrian bridge in Belfast, I saw a banner from the Lagan Boat Company with their company sloagn  that said ” She was alright when she left here “, referring to the Titanic, leaving Belfast harbour in perfect condition on the 2nd of April 1912 and unfortunately sinking on the 15th of April, just three hours after hitting an iceberg.