Welcome to my blog! Today’s blog post is a very long blog post about the Adrahan Milestones, Drumharsna Castle Looped Cycle Trail. If you are looking for a 17 Kms beautiful heritage looped country cycle around Ardrahan where you will come across Old Irish Mile Stones, visit Drumharsna Castle, keep reading!

Join my Facebook Group Gort Cycling Trails and let me know if you cycled this trail, what you thought about it, and if there are other cycle trails that should be mapped in the #burrenlowlands

Back in September when it was #Bikeweek in Ireland, the Ardrahan Heritage Group organized an event called the Ardrahan Milestones Bike Ride. Go check out their Facebook page here and give it a like! I have added out basic facts,  a detailed route description of the Ardrahan Milestones, Drumharsna Castle looped Cycle Trail and you’ll see a visual of the route. ( and my usual tips when heading for a cycle) 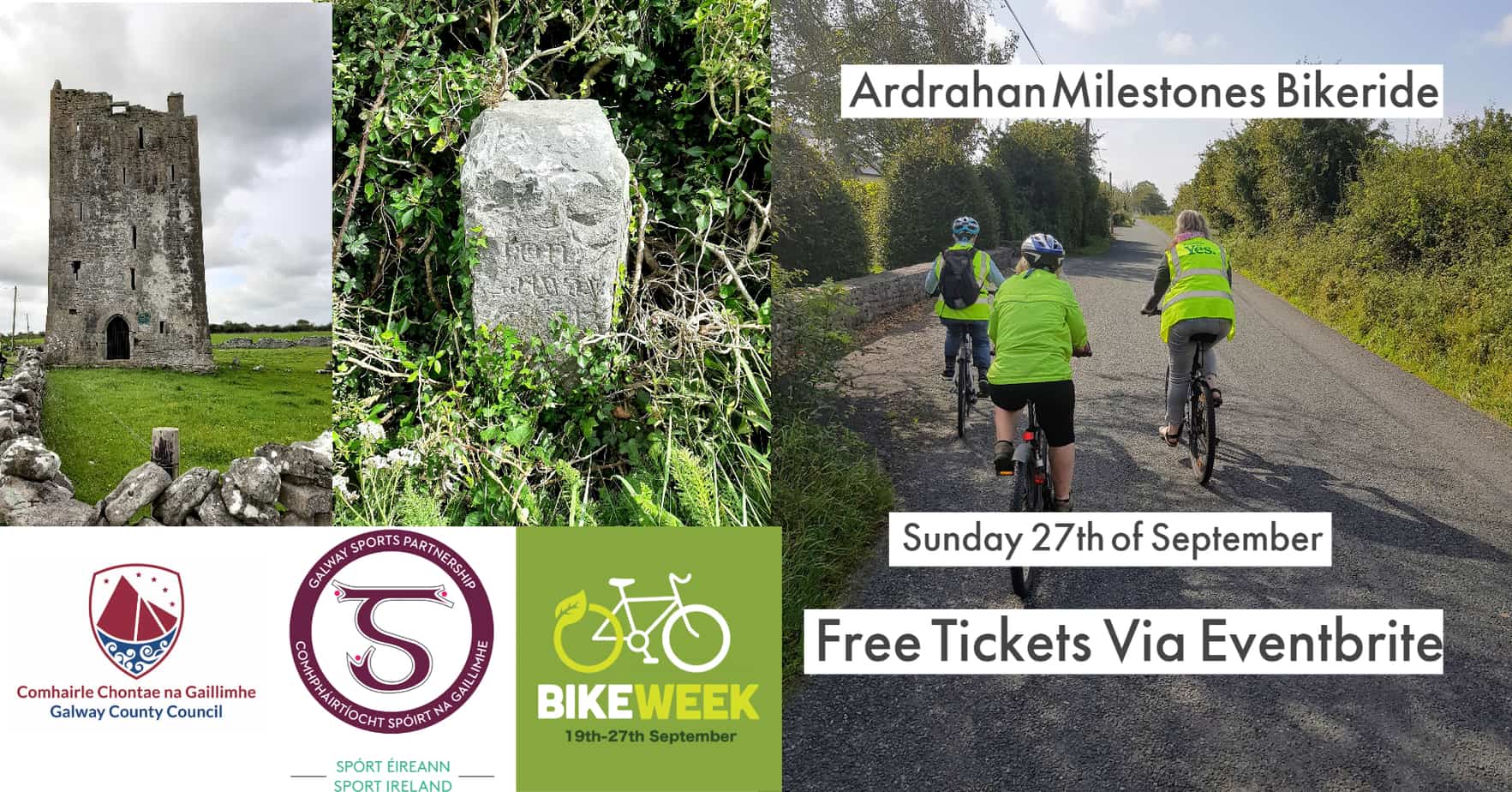 As always, please make sure you are visible, by wearing a yellow vest and switch on your bike lights (even in broad daylight) and wear a helmet. I know, in a perfect world neither should be needed. Until there are better bike infrastructures, I err on being careful and do whatever I can to be seen. Let someone know where you are heading,  charge your mobile, bring a snack and something to drink. You can stock up on essentials in the petrol station at Labane.  ( I would strongly recommend you invest in a flask to prepare tea or coffee and some kind of Bike panniers, you can thank me later!). Don’t forget to apply suntan lotion and wear sunglasses.. ( end of mummy talk):)

Set off from Labane Hall aka as Loughnane Quinn Memorial Hall ( more about that building here), into the direction of Galway.

If you recognize yourself, please comment at the very bottom of the blog:)

This road used to be the main road connecting Galway to Gort. It is now a secondary road, the R 458. It also used to be a super busy road. Since the completion of the Motorway, it is now a very quiet road, perfect for cycling. There are markings on the ground for an (attempt) at a cycle path just past the petrol Station for a short while when the cycle path merges into the hard shoulder and then re-emerges a little later.

If you are interested to cycle the Sean Bingham Mausoleum cycle loop, take a right at the cemetery. Route Description here. The cycle from Labane to Ardrahan is easy, with a slight climb as you approach Ardrahan.

I am told they are going to fix the signs:) you know who you are:)

For the Adrahan Milestones and Drumharsna Looped Cycle trail, cycle through Ardrahan and call into Irish Fiber Crafters on your left if they are open.

You can also take a left in Ardrahan into the  Kinvara direction, however, you‘ll then miss a few of the Milestones and 2 bridges( maybe that’s not so bad:)  ) Take a right in the village if you would like to cycle the Mausoleum cycle.

As you exit the village of Adrahan, you will see the Protestant church on your left, built in 1809.

Check out the history of Ardrahan here. . On the right, remains of the Ardrahan castle – dating back to the 13th century. …

Next, you’ll cross the railway line, the Ardrahan Railway Station in the background (read this article with reference to the Ardrahan Railway station here). There is a good hard shoulder you can cycle on. All the land on the left is protected land and is one of the many special areas of conservation in this area.

After a few kilometers, you will see the first bridge that crosses the Motorway. The Motorway was opened in 2010, check out this article I wrote then. Prior to the Motorway, South Galway had very few bridges. When constructions started for the Motorway, a number of bridges were built. At the time the construction company made a number of videos of rock breaking the bedrock with dynamite, I found it quite fascinating how the bedrock crumbles.  Check it out here. It’s worth to have a little stop on top of the bridge to enjoy the view, a view you usually don’t really get to appreciate if you are in the car on your commute into Galway.

It was only when we were doing the trial cycle I cycled on this road! A new discovery! This road is the original “old Galway” road, check out this flyer created by the Ardahan Heritage Group.This is a busy road, and caution is recommended , especially if you are cycling in group. Traffic signs to go slow would do well here, it’s a bit of a race track at the moment.

We were very fortunate to have a few local archaeologists on the cycle, who were involved in the archaeological excavations that took place in and around this area when the motorway was being built. I’ll have to write another article on what was found during those digs and what it all means!  More to follow:)

You’ll see an area of water on the left-hand side, which used to be a watering hole. This is what Michael Helly has to say about the watering holes.

Continue your cycle and keep your eyes on the landscape to the left. You’ll see a bit of mound, which actually is one of the best-preserved Ringforts. Another Article to follow with Drone footage. Cycle to the top, and you’ll see these signs. 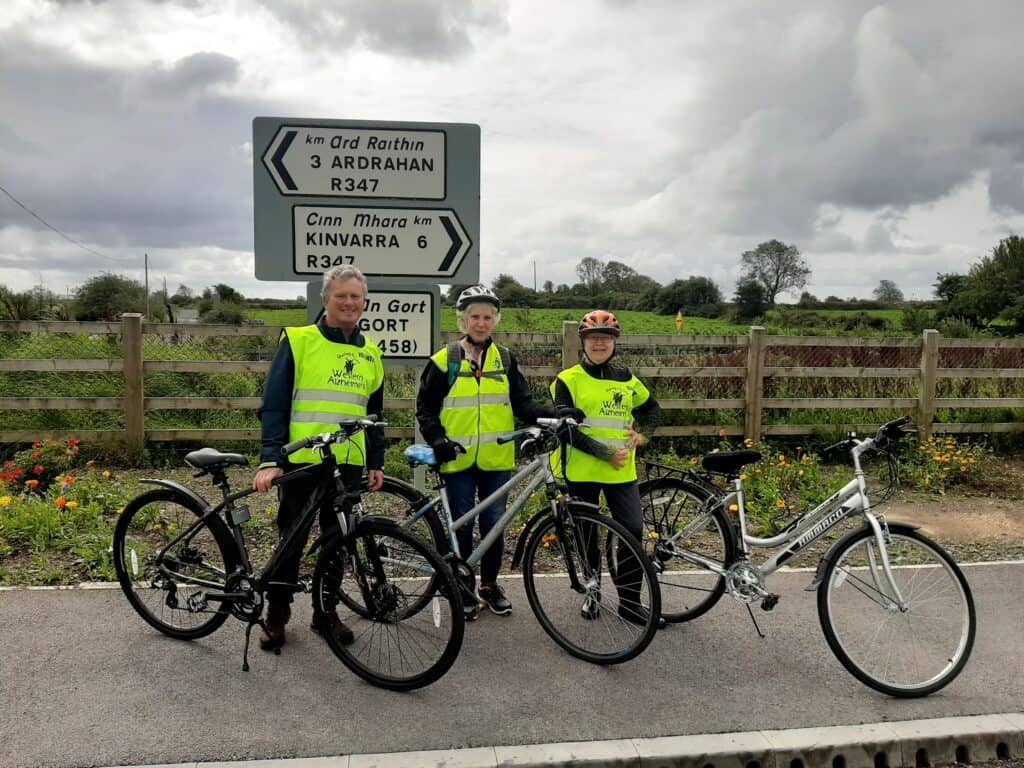 Ardrahan Heritage Group is never idle, and is always keeping Adrahan tidy, including this flowerbed. Did I tell you they have a Facebook page? Take a right, and get ready for bridge number 3 🙂 at the bottom of the bridge, take a left. If you go straight ahead, you are heading to Kinvara.

It’s now a short cycle to Drumsharsna Castle which is located on a slip road on the right. 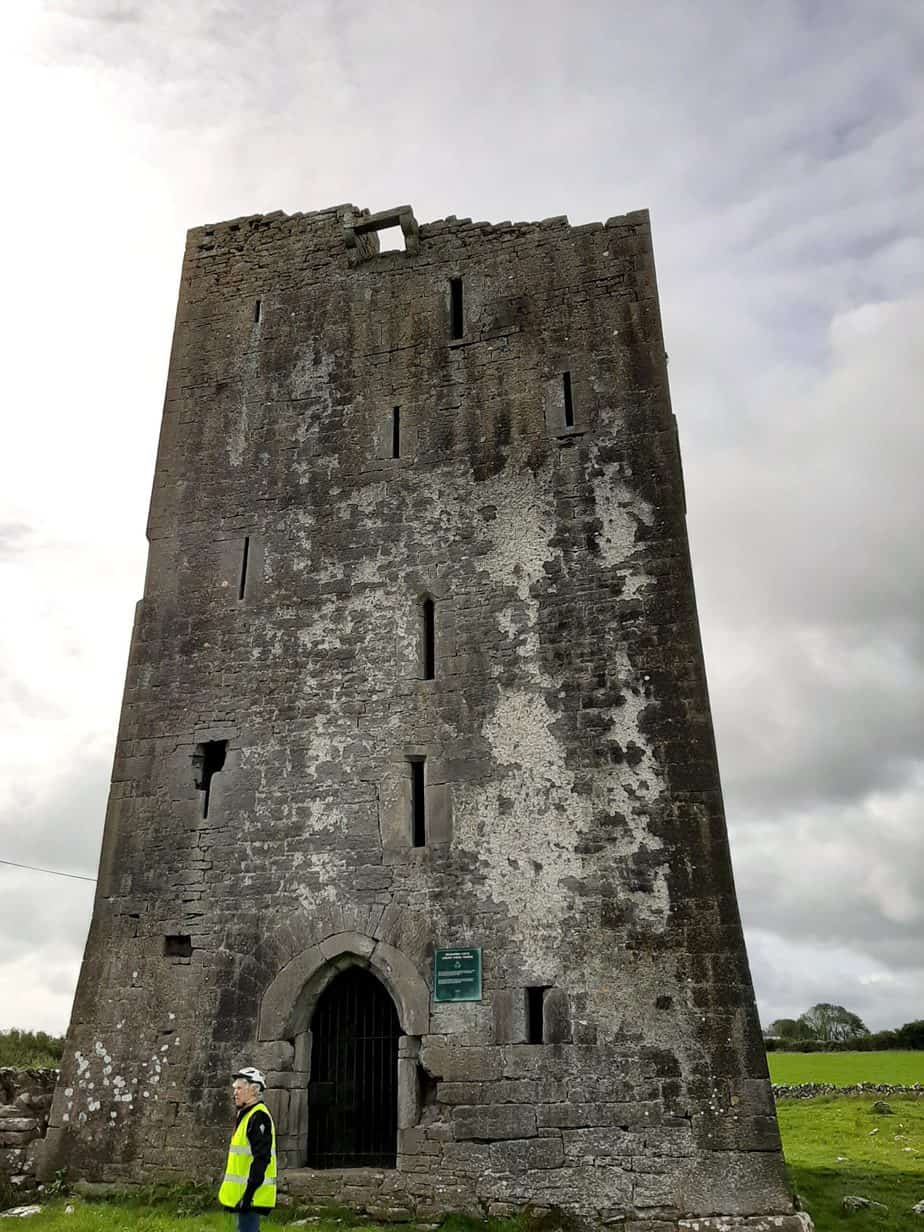 Image of Drumharsna Castle in Ardrahan

The plaque on the wall mentions that the castle was damaged in 1920’s, not really revealing what happened . All I can say ..This castle has a very dark past,  especially what happened in the 1920s. A Beagh Historian wrote an in-depth article about it here, to help you understand what happened and why Labane has a Loughnane- Quin Memorial hall.  Best to take a break here, and enjoy that snack and if you invested in a thermos, that tea/coffee will never taste so nice!!

Cycling back to where you came from, take a right and enjoy a beautiful country cycle,  overlooking fields on both sides. 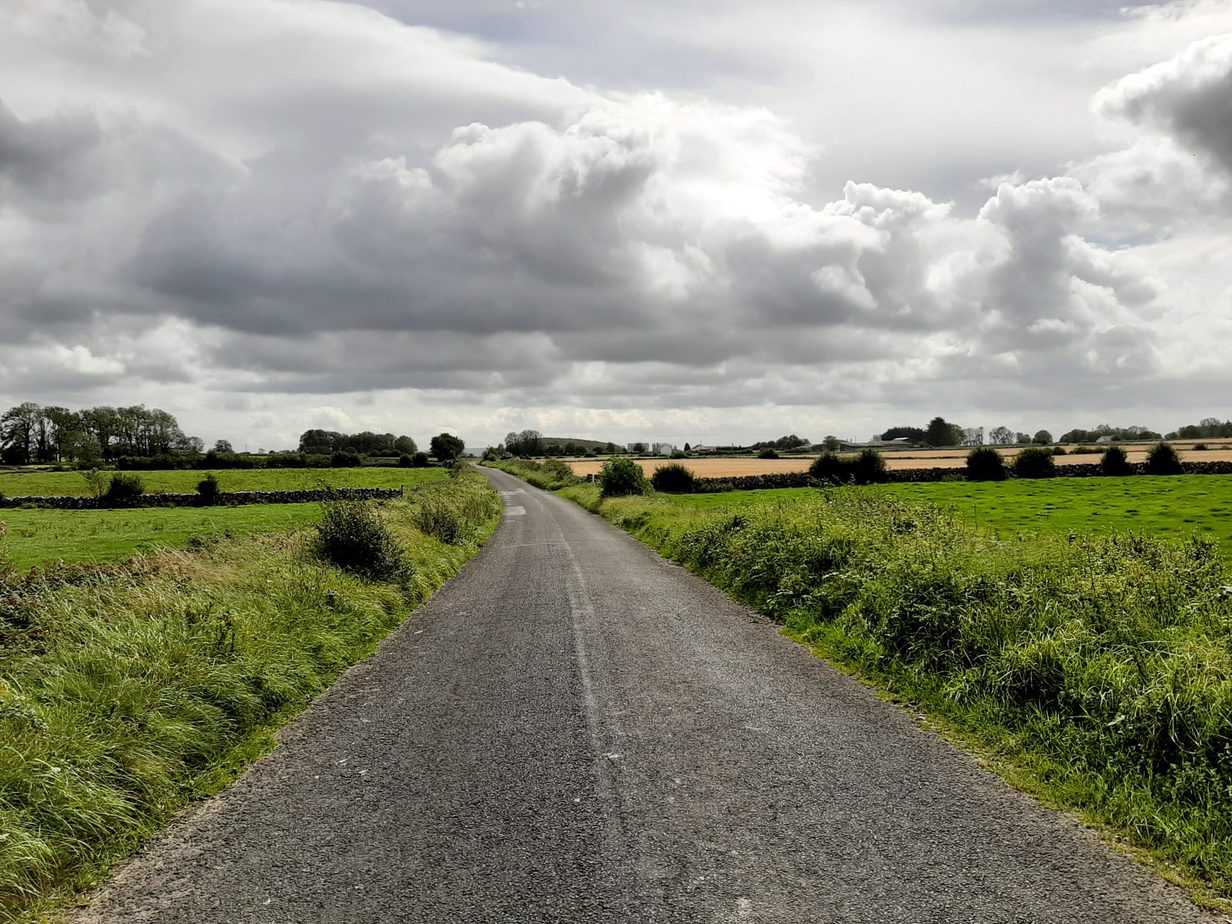 Also here you’ll come across a milestone on the left. 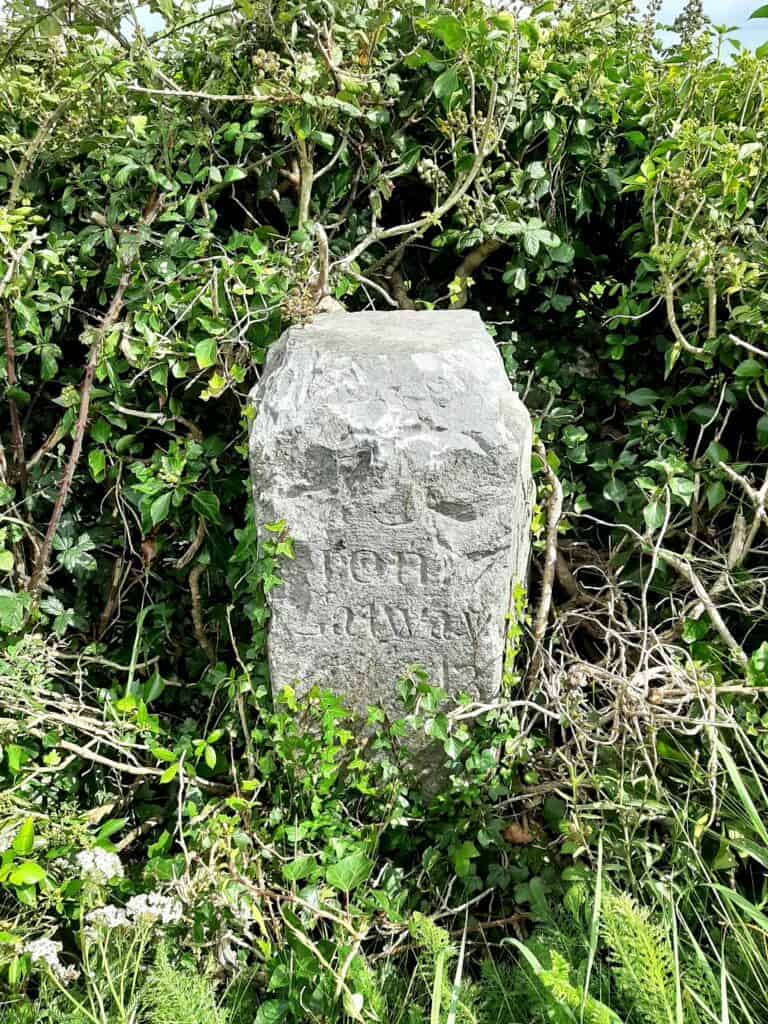 The Adrahan Heritage Group has started to identify the remaining milestones in the hope to preserve them for the next generation. You’ll cycle cross roads, an old waterpump on the right. 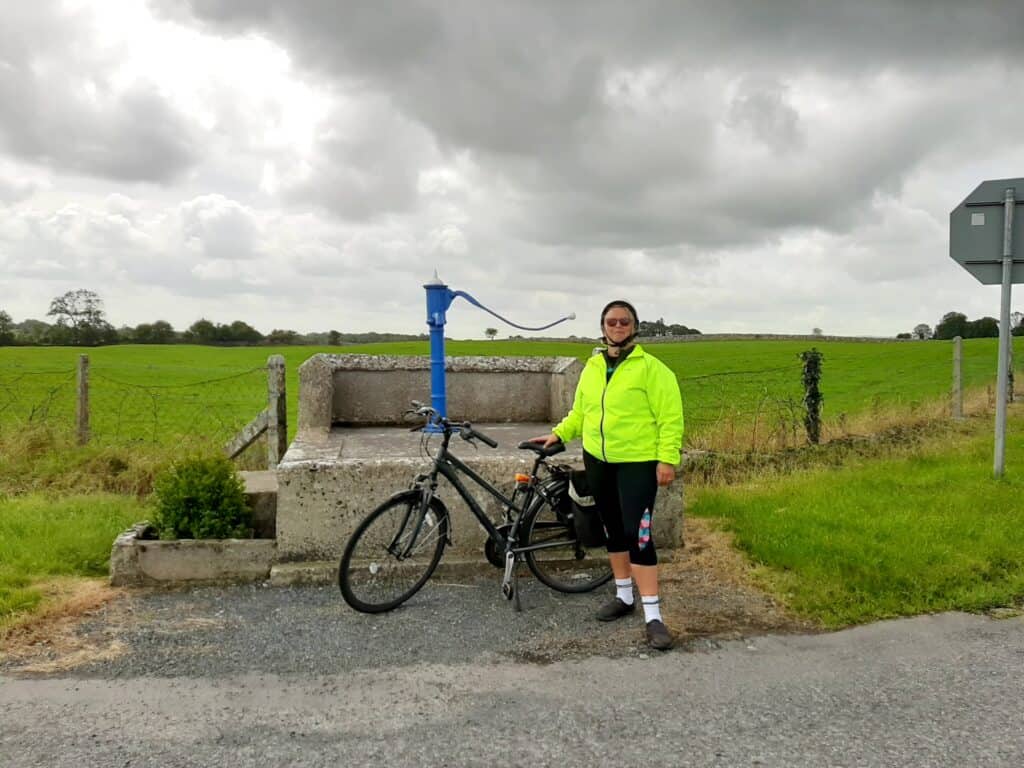 image of a waterpump and Katleen with bike

Turn left to go back to Labane, turn right into the direction of Kinvara.

Keep going straight and after a while you will come to a junction called Crann Mór, meaning “big tree” in Irish . Story goes that some people remember there was a tree trunk in the middle of the road. I can only but imagine the traffic chaos this would have caused! It’s a super busy junction, so please be careful!  If you go straight it will bring you to Kiltartan Cross, right takes you to Kinvara with Lydacan castle on the way to the right.  On the junction, on your left, you’ll see the ruins of a house, and in front of the wall, the best-preserved milestone we have come across so far. 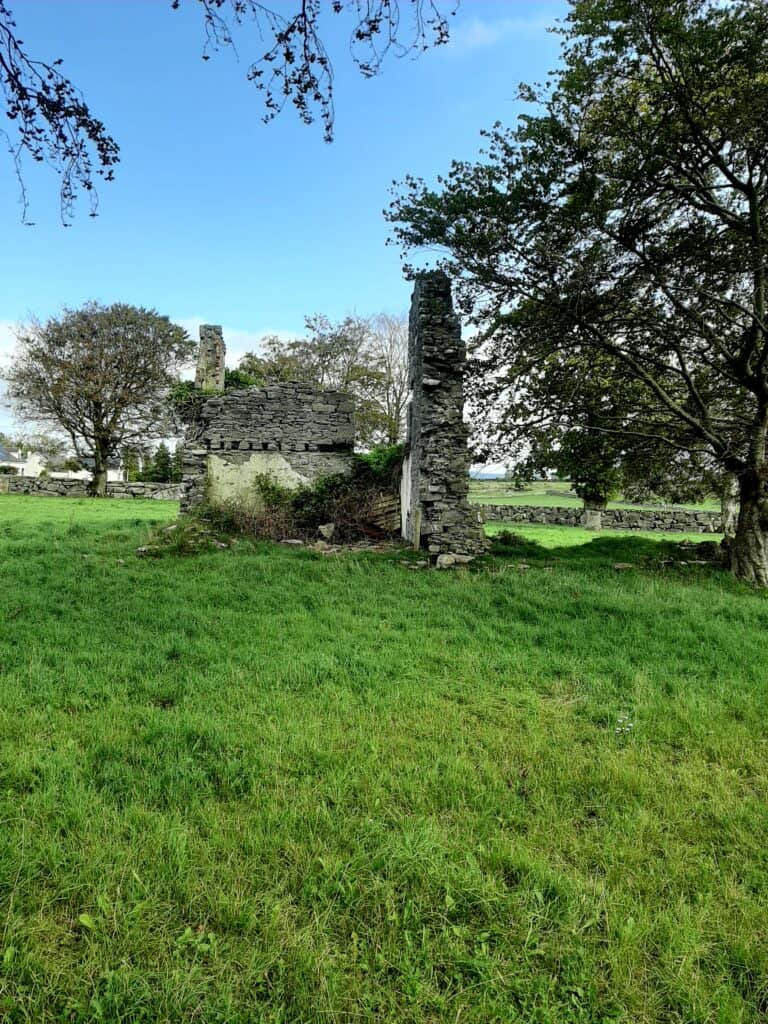 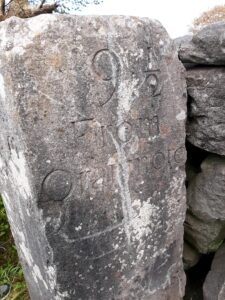 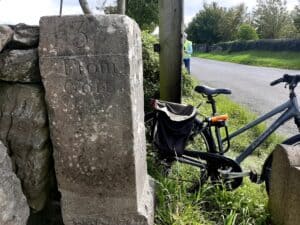 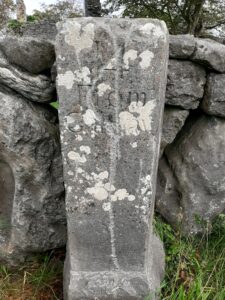 The Milestone has been moved over the years, and it’s the only milestone that is fully exposed, as all the other milestones only show a fraction of their true length, as a good part is underground.

Turn back and take the first road to the right for a gentle flat country road cycle:) until you have another bridge to cross:) Once you are over the last bridge, it’s a short cycle  to the bottom of the road, that brings you back to the main road.  On your right, you’ll see the Coolfin Turlough. 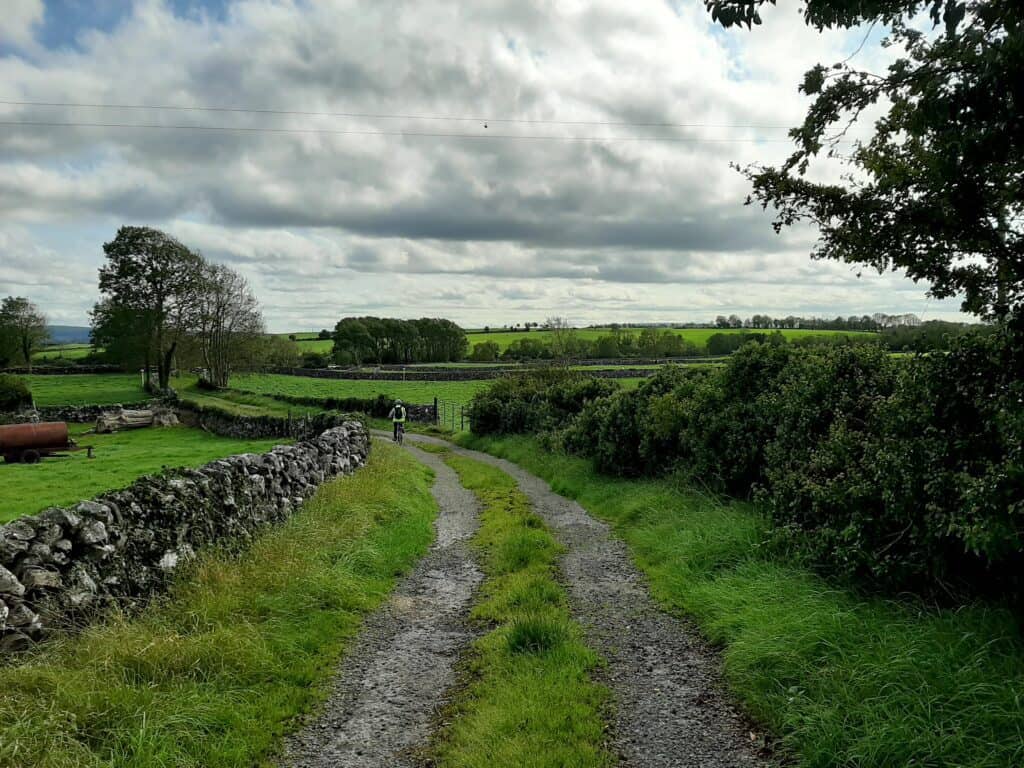 Take a left to go back to Labane where you started, and call into the petrol station for a much-needed snack/drink/rest

Well done for completing this cycle. If you like to discover other trails in the Burrenlowlands, search for Gort Cycle Trails.

Join my Facebook Group Gort Cycling Trails and let me know if you cycled this trail, what you thought, and if there are other cycle trails that should be mapped in the #burrenlowlands